Not only did Ramadan fly by, but it has been six days since Eid. Even with the coronavirus and the lockdown, time continues chugging along.

Ramadan this year was special. We were home-bound, together with my parents. I haven't spent an entire Ramadan with them since I moved to India, so it was lovely. And the twins, amazingly, fasted for all 30 days, of their own accord, and with minimal fuss. I was amazed, and so proud. Alhumdolillah!

While I missed praying in the masjid, I was happy to not iron a single piece of clothing the entire month, as well as forego the stress of getting out of the house and reaching the masjid on time, finding parking, as well as jagah (space) to pray and eat! (On the other hand, I have to admit that feeding seven people at home while keeping the house clean was a significant challenge that weighed heavily initially!)

The month taught me that anything is possible, there are learning and growing opportunities everywhere, and that faith and hope make the world go round.

**
India seems to be opening up and ending the nation wide lockdown, albeit slowly. The next few months will most likely have new challenges and norms; may we face them with all the grace and strength gathered from Ramadan. Eid Mubarak!

Reading in the lockdown

When social distancing first began, and there were indications of a lockdown happening, I could not read. I had a few book samples on my Kindle, but I simply could not focus on any of them, or decide what would be my next purchase. For me, that was not only an indication of how stressed I was, but also another stressor. I then came across an article saying that peace of mind was essential to reading, and that calmed me a little (why do we always need someone else to tell us what we already know? And why does that make us feel more validated?!). Deciding that light, feel good books were the way to go in these crazy times, I started reading Ayesha At Last, by Uzma Jalaluddin. It was nice to read about a Muslim protagonist, who wears hijab and yet is not ultra conservative or a pushover, or any other stereotype. It was a short, cute, read, 3 stars. I then read The Unlikely Adventures of the Shergill Sisters by Balli Kaur Jaswal. Reading Indian authors/authors of Indian descent is always nice, although I do not read so many of them. The Shergill Sisters was a good read, and it brought back fond memories of my high school Sikh friend. The plot was good, the characters were interesting and the prose was good -all in all, 3.5 stars.

I am now reading Yes No Maybe So, which is a cute YA read. Is it strange to be nearing 40, and still enjoying YA fiction? I hope not. The whole age thing confuses me, I have to say. I forever feel that I am stuck at 23. Even though my boys are now 7, I hardly consider myself a practiced mom. In fact, I largely feel that the roles of wife, daughter, mother are ones that I am still learning.

**
Another good thing to come out of this lockdown was the zoom calls with my high school friends. I hadn’t seen most of them in over 10 years. It was nice to reconnect with these girls, who had once been such an important part of my life. I do hope we manage to stay in touch better now, inshallah.

Similarly, z and I have been meaning to call each other for ever, but the timings never worked. Coronavirus lets us chat more often, with our schedules more home bound now, so for that, alhumdolillah.

laughter is the best medicine

The twins' laughter is music to my soul. I want to bottle it up and just keep listening. The expressions on their faces as they crack up, the hitting their legs and then falling over, clutching their stomachs as they convulse in laughter; oh.my.gosh :)))

We started reading Roald Dahl's The BFG, and the twins are in love. This morning we came across the BFG speaking for the first time, and his poor grammar left them in giggles and smirks. Then we came across 'human beans', 'telly telly bunkum box' and 'radio squeaker', and that was it: the stomach clutching, hitting and rolls on the bed just wouldn't stop. I was cracking up watching them, and just thinking, alhumdolillah. For them, for their innocence and wonder, for their growing up.

Laughing together is such a great thing. I keep telling H that we don't laugh together as much as we should. Apart from the endorphins that laughing brings, it is such a great feeling to share a joke together, and remember it later :)

I found this funny and poignant, seeing that I currently belong to the 'not let them out of my sight' category.

A few days later, a 22-year-old boy in my masjid died in a car accident. A group of friends were taking the car for a ride. A crazy ride, going at over twice the speed limit. While the rest of them had minor injuries, including the driver, this one boy died on the spot. I cannot begin to understand how his parents will rationalize and deal with this tragedy.

There was a lot of talk about safe driving and how those younger than 25 should not be allowed to drive. Speeding and reckless driving are a huge concern here, largely due to the lack of law enforcement.

To let your child out of your sight, is truly such a scary thing. It requires enormous faith. As the famous quote goes, being a parent 'is to decide forever to have your heart go walking around outside your body'. I have yet to let my boys sit in someone else's car without either me or H around. Of course, I know this will very soon have to change. As they get older, I will have to let them go. I will have to trust that they will make safe choices. I found myself wondering how I can ensure that they keep good company.

In the end however, life comes with no guarantees. I can only pray: Inshallah kheir!

On the best of days, my self esteem is moderate. Which means that on bad days, it is loooooowwww. I am too old for this surely. I always thought that low self esteem was something I would get over by the time I was married. Huh. Marriage and moving countries took my self esteem to much lower levels than ever before.

Two things happened in the past two months that really buoyed my self esteem, and I just want to write them down, so I can come back and remember on bad days. (Although, to be honest, simply recalling these events does not help when I am feeling like a complete loser.)

One: When the twins were being examined prior to taking their Juz Amma imtihaan, both examiners were impressed that they had learnt from me, at home. Their indirect praise was truly a balm, as mostly I feel I am a pretty inadequate mom.

Two: On the basis of meeting the twins for the first time, the new madressah moallim asked me if I could help him teach the younger kids. While this totally cracked me up (he would not have asked if he had seen them do their usual masti in the masjid), it also made me feel like I was doing something right. Alhumdolillah.

I finished Kate Atkinson's Big Sky, and thoroughly enjoyed it. I have now started The Other Americans by Laila Lalami, which I am also thoroughly enjoying so far :) I am a sucker for novels that use different chapters to voice the perspectives of different characters, and Lalami is doing this particularly well. I was surprised to realize that Lalami was also the author of The Moor's Account, which I simply could not get into. The Other Americans is completely different, set in contemporary America. I am also a sucker for the immigrant experience, for many different reasons. One of the chapters was titled 'Maryam', and when I showed it to the twins, their amazement and joy was so nice to see :) Even at the ripe age of seven, they have so many firsts to still experience, and I am so thankful to witness these with them.

Posted by md at 4:37 pm No comments:
Labels: authors of colour, books

It's a small world. Or so we keep saying. We usually say it, ironically, when big coincidences or crazy connections are found. My world, however, really is very small. It encompasses, mostly, about a quarter of Kandivali, which is one of Mumbai's many many suburbs. My tiny apartment, the masjid, the twins' school and madressah; these make up my world. The people involved, also make up a very homogeneous and small number. Just to emphasize: not one of the people in this tiny world of mine, is non-Indian, or even single. So, small world.

This epiphany came to me when I was discussing feeling like a loser, because the girls that I hang out with in the masjid are all younger than me, and have their stuff together much better than me (most importantly, they cook well, and just seem much better adjusted as moms and adults). The conversation meandered down paths that led me to recall friends who are single, who are not Indian, who do not cook.. Which is when I realized that I was constantly comparing myself to a tiny group of people who grew up with a totally different mind set than I did, in a different culture and a different value system.

I have spent a good part of my life being different. At school, I was the only one among my friends who enjoyed spending breaks reading in the library. At university, I was the only student from Hong Kong. Later on, I was the only veiled girl, the only practicing Muslim, the only person who reads fiction, and so on. Most of the time, this difference was largely fun, and a tiny bit irksome. Mostly because, my world used to be much larger. There were so many different people around, of all ages, races, and with such varied interests. I fit right in, I was just as cool as everyone else.

With a much smaller world now, where everyone is the same nationality (this never happened to me in the first 30 years of my life; it's a huge deal), where most people get married in their 20s, have two kids by their 30s, where moms stay home while the kids are young, etc etc, I am floundering.

I am different. And it is okay. Alhumdolillah for the Internet, which makes it so easy to connect with my friends outside this tiny world of mine.. who remind me that I used to be a part of another group, another culture, another world, where I was comfortable.

This small world of mine does not make me unhappy; it has the twins and H. It has new friends and new experiences. I just need to stop worrying about not being like everyone else, because I am not. I never will be. I will just be me, and I will blossom. 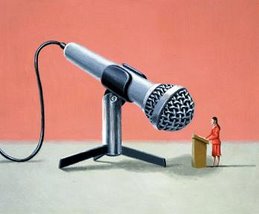